Minimum wage in Europe - Yet another gender divide?

Despite the progress in statutory minimum wages across the many EU Member States over the last decade, the situation highlights important divides.

In 2019, around 7% of employees in the EU were statutory minimum wage earners - that is, earning up to 10% above or below the minimum wage rate in each Member State. Across countries, this rate ranges from 10 to 15% in several central and eastern European Member States (Romania, Poland, Bulgaria, and Lithuania) and Portugal to less than 4% in Czechia, the Netherlands, and Slovenia.

Against a background of notable minimum wage hikes in the many Member States over the last decade - with statutory rates growing above-average wages in most cases - a growing share of employees fell within the range of statutory minimum wage levels. The proportion of minimum wages earners increased in the EU from 5.5% in 2010 to 7% in 2019.

This expansion occurred especially in those Member States where minimum wage levels progressed the most, notably in central and eastern Europe (Romania, Poland, Bulgaria, Slovenia, and Slovakia). Significant increases also took place in countries such as Spain, Portugal, and the UK, following notable minimum wage hikes in recent years, as well as in Germany after introducing its statutory minimum wage in 2015.

While this might seem like an increasingly positive picture, further investigation reveals a significant gender divide: more women earn less. 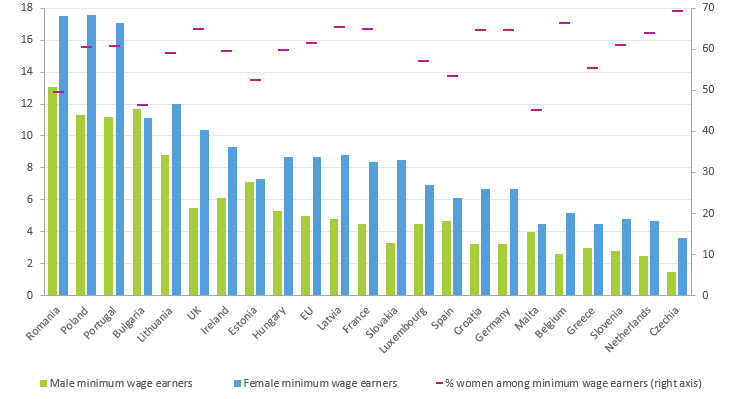 A household measure of material deprivation captures the capacity of the household to afford several items considered desirable to enjoy adequate living standards, such as being able to pay the rent, keeping the house warm, facing unexpected expenses, going on holidays, and having a washing machine or a telephone.

Across countries, the extent of employees affected by household material deprivation varies greatly: from above 20% in several central and eastern European Member States (Romania, Hungary, Bulgaria, and Croatia), Greece, and Malta, to below 10% in the Benelux countries and Germany.

Notes: Countries are ranked by the share of minimum wage earners living in deprived households, from higher to lower, left to right. Data for Ireland and the UK refer to the EU-SILC 2018 wave. The EU aggregate excludes the Member States without statutory minimum wages (not depicted) and refers to the EU-SILC 2018 wave to include Ireland and the UK.

The link between minimum wages and household material deprivation is weakened because the latter is a complex phenomenon caused by multiple factors. Studies have highlighted the joblessness of other household members - rather than low wages - as the main reason for poverty at the household level in Europe. Nevertheless, Eurofound data show that minimum wage earners are much more affected by material deprivation than those employees earning higher wages across all Member States, which reveals a connection between minimum wages and material deprivation. In the current context, it is also important to note that minimum wage earners - and the materially deprived households in which they are more likely to live - are especially vulnerable to economic downturns.

The impact of the pandemic has already taken a disproportionate toll on women across many areas, which is likely to continue. Policymakers need to ensure a comprehensive policy strategy (comprising not only statutory minimum wage rates but, among others, social benefits, income protection, childcare and eldercare facilities, and active labor market policies), improving the working and living conditions of minimum wage earners and their households.